Crossroads and Fountains, the Not-So-Secret life of Pompeii – Two Researches Throw Light on the “Archaeology of Everyday Life”

“Live” at the Archaeological Excavation of Poggio del Molino. A Roman Coastal Settlement in Tuscany – VIDEO

Leading-edge Pompeii researcher Matthew Selheimer chaired a symposium at the Archaeological Institute of America’s annual meeting, (the AIA) talking about the fountains, roads and intersections of the world’s most famous archaeological site.

Three engaging pieces of research were presented about Pompeii in the debate facilitated by Dr. Selheimer, but extra colour was added to the session by additionally featuring a study of the social costs and benefits of building work in a city context, which whilst officially focussed on Rome, the insights into the stressful life whilst new buildings were being installed were just as relevant to Pompeii too.

1.The paper by Matthew Notarian highlighted the function of all the fountains in Pompeii – there was a dense grid of these on street corners all fed by fresh water from the Serino Aqueduct and comparable to the ‘nasoni’ aqueducts on street corners across Rome.

There were more than 2000 doorways in Pompeii and Notarian has calculated least-cost street routes from every doorway to the nearest fountain by factoring the effect of Pompeii’s natural topography on pace. One surprise in Notarian’s paper was his assumption that women would have performed most of the carrying of water in ancient Pompeii.

The study of fountains is not so straightforward: “They are built of different materials, different sizes, and different arrangement of stones, and even different types (basin, pillar, etc.) – says professor Notarian –  It is open question whether these differences reflect different chronological phases of the city’s water supply, different supplies of building materials, different benefactors (public, private), etc. I proposed in my paper that the varying sizes may reflect an organized plan to install larger basins in regions of the city with a higher concentration of individual private dwellings, although some fountains were over or under utilized nonetheless”.

Notarian’s digital elevation models and his map of the fountain / door street network which includes all the fountains used for public water in the study  pose new questions about water supply – particularly to the highest parts of the city.

LINK TO “Historical Aqueducts in the Bay of Naples”

2. Selheimer’s presentation concernedthe nature of two crossroads of Pompeii, both adjacent to baths-complexes, one in the western portion of the walled city north of the forum, and one towards the centre where the street widens to form a ‘piazza-like area’ in the E-W road which is higher than the N-S road, the later of which features a public fountain adjacent to a water tower.  Selheimer analysed both of these cross-roads concentrating on a ‘streetview’ rather than the ‘plan view’ of each crossroads and showed an in-depth knowledge of the urban structure of Pompeii and intuitive understanding of how its topography would fit in with the lives of the ancient inhabitants.

One question remained unanswered: Selheimer was unaware of any evidence to indicate how traffic was organised in Pompeii’s ancient streets.   The streets were very narrow, and damage from cart wheels indicates that carts would have occupied the entire width of one of the city streets.  For completeness, his research needs to help us understand better how they were regulated:  whether the directionality of traffic flow along these streets was regulated by traffic policemen or whether each street had a set direction of flow at a particular time of day, for example 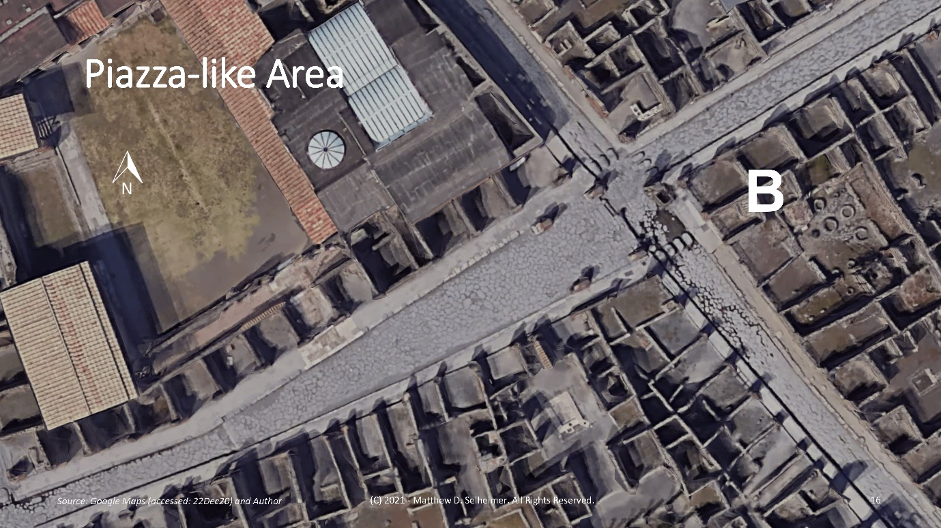 Papers delivered at the 2021 Annual Meeting of the Archaeological Institute of America Session Block 3E: Space and Place in Rome and Pompeii January 9th, 2021; 9:20AM US Central Tim

Articolo precedenteDeciphering the Linear Elamite – A highway to understand the Proto-Elamite writing
Articolo successivoThe castle and museums of Scarlino: from the Bronze Age to Medieval archaeology – WATCH VIDEO

The excavation at Doss Penede, in the alpine province of Trento (Italy), near the modern town of Nago began in 2018 through a collaboration...
Continua a leggere
Archaeology of the Mediterranean

In Summer 2021, archaeologists investigated the so called "Complesso dei Riti Magici" at the Pompeii's Regio II. The main goal was to collect new...
Continua a leggere
Archaeology of the Mediterranean

The ancient Forum Granaries at Pompeii are open to the public for the first time in July and August 2021 (Prior booking is recommended)....
Continua a leggere

“Live” at the Archaeological Excavation of Poggio del Molino. A Roman Coastal Settlement in Tuscany – VIDEO

Conflict Archaeology on the Sea: The Mercure Shipwreck at the National Museum of Marine Archaeology at Caorle (Venice, Italy)

ArchaeoReporter is registered at the Court of Padua n.2500/2020