For five years, excavations have been underway in the ‘lost’ Roman amphitheatre of Volterra. ArchaeoReporter could not have chosen a better location for its first story. The report features aerial images taken with a drone, as well as close-ups of the site, which was discovered in 2015 and continuously challenges what is known about classical archaeology. The amphitheatre was once home to fierce gladiators and gruesome battles, but more importantly it is considered to be a symbol of the romanisation of Etruria. Elena Sorge, the scientific director at the Archaeological Superintendence of Pisa and Livorno [Officially: Soprintendenza archeologica di Pisa e Livorno], guides us through the work site, where archaeological investigations and restoration efforts are carried out simultaneously, unearthing new findings month after month. 2020 has marked the discovery of the underground passageways and tunnels, as well as of the vaulted corridor, coins and other finds that are critical for dating the site, which is currently thought to come from the Julio-Claudian era.

This discovery was actually made by accident during the maintenance work being carried out on a moat previously excavated in the 1950s. It is a small, rapid stream of water flowing down the Volterra hill, right behind Porta Diana and a little downhill from the Roman theatre. The Superintendence has entrusted the monitoring of the area to professional archaeologists, a typical example of preventive archaeology. It is important to remember that in many excavation sites there is an archaeological risk. It really says a lot that, in Italy, being able to learn about and enhance one’s own land is considered to be a risk, instead of a potential source of valuable research, both in archaeology and in other fields of study. In short, the wall discovered in July, 2015, has a slightly accentuated curve, which is indicative of something unconventional, together with the fact that the construction technique is similar to that of the theatre from the Augustan age.

This amphitheatre was nowhere to be found in any of the ancient sources, so it is a case to be studied in itself. No one had suspected the land to bear fruits other than those provided by the trees that abound in the region. Of course, the area is adjacent to the Etruscan necropolis of Portone; however, there was no trace whatsoever of any Roman building or construction. Throughout the various excavation projects, the amphitheatre was found to be astonishingly large, its minor and major axes measuring 65m and 82m respectively. The archaeological site of Volterra is under the authority of the Superintendence of Archaeology, Fine Arts and Landscaping for the provinces of Pisa and Livorno (SABAP PI) [Officially: Soprindentenza Archeologica Belle Arti e Paesaggio per le province di Pisa e Livorno (SABAP PI)] in collaboration with the Institute of Science for Cultural Patrimony of the Italian National Research Centre [Officially: Istituto di Scienze per il Patrimonio Culturale del CNR]. Currently, the future of the amphitheatre lies in the hands of the town of Volterra, which acquired the area of the archaeological site, thus rendering it public. It also depends on funds allocated by the Cassa di Risparmio di Volterra savings bank and foundation, as well as the Art Bonus contest.

WHATCH THE VIDEO REPORTAGE: VOLTERRA, THE AMPHITHEATRE THAT WAS NOT THERE 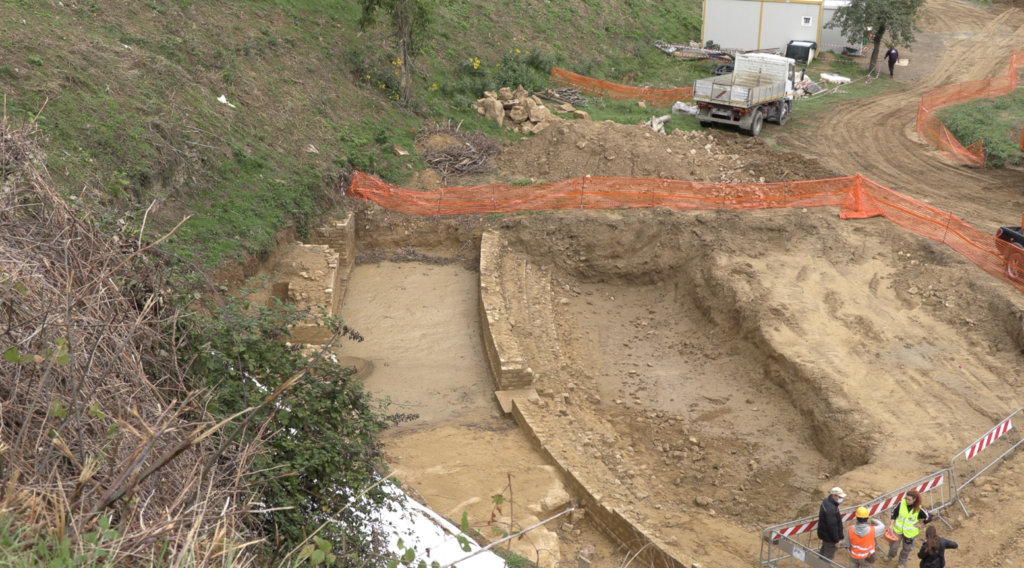 THE AMPHITHEATRE OF VOLTERRA, BOOTS IN THE FIELD (VIDEO)

THE RESTAURATION OF THE AMPHITHEATRE (VIDEO)

Articolo successivoDeciphering Linear Elamite, the world’s oldest phonetic writing system. Watch a sneak preview of how to translate these inscriptions

Archaeology of the Mediterranean

Mary Beard is clear: “I think classical archeology has been a bit unfairly criticized” The great English classicist, a long career as a professor...
Continua a leggere
Archaeology of the Mediterranean

The Monti Lucretili are a mountainous area on the outskirts of Rome. Nowadays they appear as a classic Mediterranean pastoral landscape, among olive trees,...
Continua a leggere
In evidence

The Department of Civilization and forms of knowledge of the University of Pisa has promoted the excavation of the San Sisto Garden, in the...
Continua a leggere

ArchaeoReporter is registered at the Court of Padua n.2500/2020